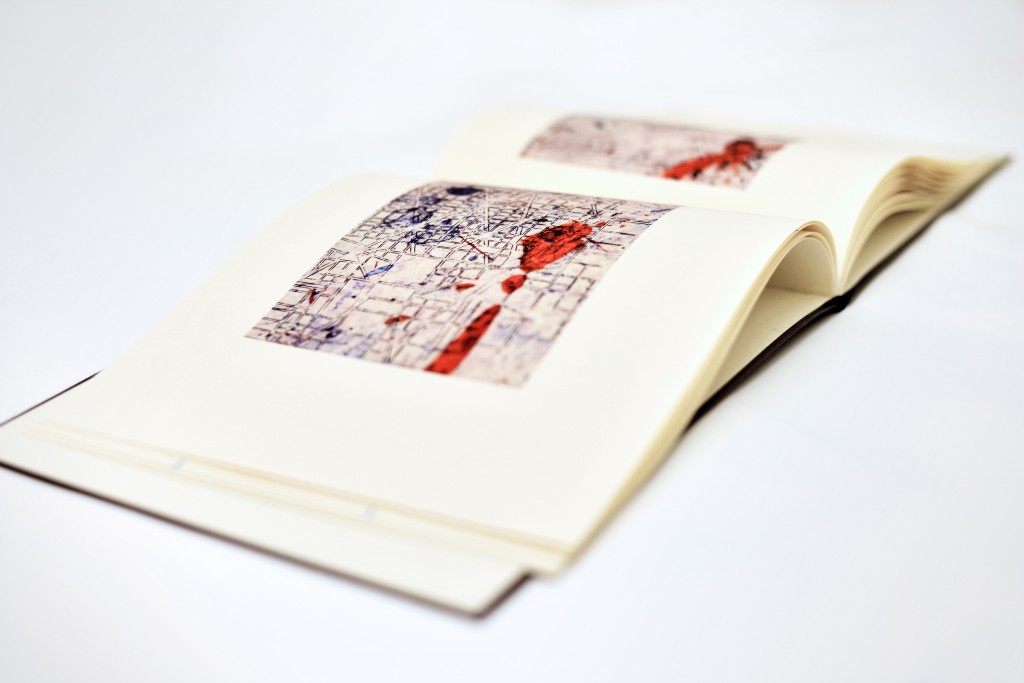 Minnesota Center for Book Arts and the Minnesota Book Awards are proud to announce that the 2015 Minnesota Book Artist Award goes to Harriet Bart, Philip Gallo and Jill Jevne for the artist’s book Ghost Maps.

Part of a longstanding collaborative relationship between artist, printer and binder, Ghost Maps was conceived and created by Harriet Bart and printed by Philip Gallo at The Hermetic Press in Minneapolis, and its binding was designed and executed by Jill Jevne of Jacobsen, Minnesota. Since 2000, Bart, Gallo and Jevne have collaborated to produce ten artist books, two of which have been honored with Minnesota Book Awards in the Fine Press category.

The images in Ghost Maps were created by Bart during a 2010 residency at the Virginia Center for Creative Arts where the paint-splattered floor of her assigned studio became the focus of a new project. Inspired by Italo Calvino’s Invisible Cities, Bart began to view the encrusted floor of Studio VA5 as an archive of the creative process. Attending to color and repetition, she marked off sections of the floor with tape, scrubbed spaces between them and took aerial photographs. The result is a stunning, site-specific piece documenting the presence and absence of the forty-six artists who preceded Bart in Studio VA5.

Bart, Gallo and Jevne will receive special recognition and an award at the 27th annual Minnesota Book Awards Gala on Saturday, April 18, 2015, at the Saint Paul Union Depot.

Harriet Bart (Minneapolis, MN) creates evocative content through the narrative power of objects, the theater of installation, and the intimacy of artists books. She has a deep and abiding interest in the personal and cultural expression of memory; it is at the core of her work. Using bronze and stone, wood and paper, books and words, everyday and found objects, Bart’s work signifies a site, marks an event, and draws attention to imprints of the past as they live in the present.

Bart’s work has been exhibited extensively throughout the United States and Germany, and she has completed more than a dozen public art commissions in the United States, Japan, and Israel. She has been the recipient of fellowships from the Bush Foundation, McKnight Foundation, MacDowell Colony, Virginia Center for Creative Arts, NEA Arts Midwest, and the Minnesota State Arts Board. Since 2000, Bart has published numerous fine-press books and mixed media bookworks. She has won two Minnesota Book Awards. Her work is included in many museum, university, and private collections, including: Metropolitan Museum of Art, National Gallery of Art, Library of Congress, Walker Art Center, Minneapolis Institute of Arts, Weisman Art Museum, Jewish Museum, National Museum of Women in the Arts, and Sackner Archive of Visual and Concrete Poetry. She is a guest lecturer, curator, and founding member of the Traffic Zone Center for Visual Arts in Minneapolis, MN. Bart is represented by Driscoll Babcock, NY.

Acclaimed artist, poet, typographer and master printer Philip Gallo has operated The Hermetic Press since 1965 when he first began printing concrete and visual poetry. For the ten years between 1990 and 2000 he was closely associated with Granary Books and printed many books in collaboration with other artists, including John Cage, Susan Rothenberg and Carolee Schneemann. His books and books that he has printed are in collections throughout the world.

“I live in rural northern Minnesota on a small farm on the Mississippi. Book design is only one hat that I wear. Among my many “other” jobs are: rural mail carrier, food coordinator at an assisted living facility, forest campground caretaker, farming, and the pursuit of my own artwork separate from bookbinding. All of these inform my aesthetic. As a bookbinder I have always valued functionality first. The book must be square, open properly, and be durable in its construction. The design should serve the artwork and print. With few exceptions, I have kept minimalism as an ideal to achieve this.”

About the Minnesota Book Artist Award

This annual award, sponsored by Lerner Publishing Group, recognizes a Minnesota book artist or book artist collaborative group for excellence of a new artistic work, demonstrated proficiency and quality in the book arts through their body of work, as well as an ongoing commitment and significant contributions to Minnesota’s book arts community. Past recipients include Fred Hagstrom (2014), Jana Pullman (2013), Bridget O’Malley and Amanda Degener of Cave Paper (2012), Regula Russelle (2011), Wilber H. “Chip” Schilling (2010), Paulette Myers-Rich (2009), and Jody Williams (2008). For more information about the award or past winners, visit the Minnesota Book Awards website.