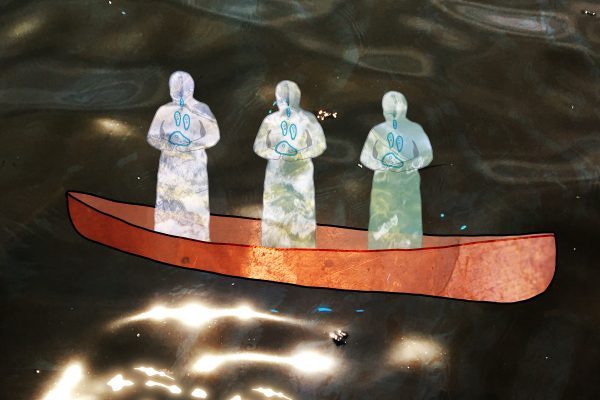 This gathering of visual art and alternatively published writing from Indigenous artists, poets, filmmakers, and their collaborators is created in solidarity around an essential concept, common to many Indigenous cultures: Water is Life.

This past year (2016 and early 2017) tens of thousands of people joined activists in camps at Standing Rock, North Dakota. Their activism was centered around prayer and creative acts– proving that Indigenous resistance founds itself in, and asserts our presence through, art. This exhibit focuses on art that lived in and grew out of the Water Protector camps and other actions to protect our water for all.

Water is Life is the rallying cry of Water Protectors, both at camps on Standing Rock tribal lands and elsewhere. Indigenous people’s political actions have created a resonating resistance to extraction industry. The #nodapl movement, which has gone beyond Standing Rock, objects to the Dakota Access Pipeline and other pipelines, which tribes assert violate their treaty and water rights and endanger us all. Divestment efforts are ongoing and global, resulting in direct financial consequences for companies and investors that seek to profit by violating treaties and polluting the earth. A surge of organizing energy has come from artists and culture bearers.

Through the generosity of many people, we are able to present activist art including a zine produced at the camp school by children living in camps at Standing Rock, a scale version of a painted tipi that was erected at Standing Rock, and a graphic novel excerpt arising from a visit to support Water Protectors. Several of these works reference the Water Walkers, lead by Anishinaabe and other Indigenous women. Members of this group regularly travel the country to care for water through song and prayer along rivers and lakes. Women protect the waters near their home as well. It is a way of life.

As is Anishinaabe tradition, this exhibit offers gifts to visitors in the form of free copies of poems and images from Standing Rock via Broadsided Press, a free downloadable poem publication.

ACKNOWLEDGEMENTS: The artists in this exhibit were invited by Heid E. Erdrich (Turtle Mountain Ojibwe) who wishes to thank them from the heart for sharing their vision and action through their images. Heid thanks Minnesota Center for the Book Arts staff Jeff Rathermel, Sarita Zaleha, and Tom Spence; John E. Burke, and Li Boyd, for their technical assistance, patience, support, and skills.