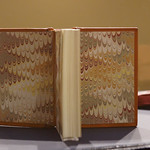 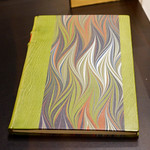 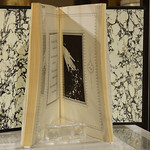 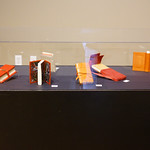 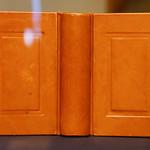 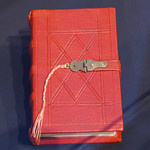 Minnesota Center for Book Arts (MCBA) and The Friends of the Saint Paul Public Library are pleased to announce Jana Pullman as the winner of the 2013 Minnesota Book Artist Award. This annual award — presented by MCBA and the Minnesota Book Awards, and sponsored by the Lerner Publishing Group — recognizes demonstrated excellence and innovation of artistic work during the past three years, as well as significant contributions to Minnesota’s book arts community. Previous recipients include Cave Paper’s Amanda Degener and Bridget O’Malley (2012), Regula Russelle (2011), Wilber H. “Chip” Schilling (2010), Paulette Myers-Rich (2009), and Jody Williams (2008).

Pullman’s primary artistic work in the book arts is in the area of Design Bindings. She creates unique bindings for specific books using materials such as leather (from goat, calf, buffalo, fish and even more exotic creatures), woods, metals, handmade papers, even eggshells. Her high expectation of craftsmanship pushes her to improve technique and explore new approaches. She is continually intrigued by the opportunity to use new materials and loves to utilize historical elements in her work. For Pullman, the book is part of a unique artistic medium that will never die out or be fully replaced.

Pullman is a faculty member in Book Arts at the College of Visual Arts in Saint Paul. She has taught a variety of workshops nationwide and since 1997 has been conducting classes in papermaking and bookbinding at MCBA. Pullman has also worked in printmaking, papermaking and as a book and paper conservator. She has been displaying her work in galleries for decades and has participated in exhibitions throughout the United States and in England and France. The recipient of several prestigious awards, Pullman was most recently the winner of the design award for 2012 Helen Warren DeGolyer Triennial Competition for American Bookbinding.