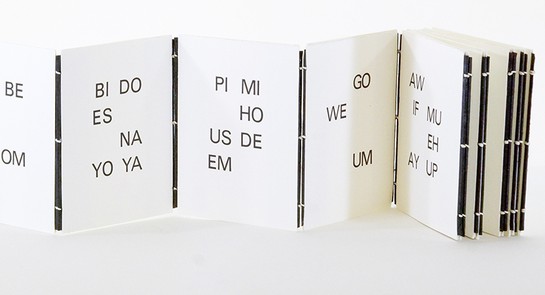 Richard Stephens has been a fixture at Minnesota Center for Book Arts for twenty years and is a founding member of MCBA Artists’ Cooperative. His first class was ‘Japanese Stab Bindings’ with Michael Norman, then on to inks with ‘Monoprints’ taught by Barbara Harman. Since his seduction by book arts, Richard has published ten fine press books under his ‘supersessionpress’ moniker.

Amoreena (Amo) Tarvas grew up in the eclectic town of Duluth, Minnesota. Her earliest memories of drawing consist of copying album cover art from her parents’ extensive collection. After completing a B.F.A. in Illustration at the American Academy of Art in Chicago, Amo spent several years teaching at a private art studio. In 2012 she moved to Minneapolis where she fell into the world of letterpress, printmaking, and book binding. Embracing these newfound tools, Amo recently applied for and received the Jerome Fellowship grant. She looks forward to her new project and her continuing education as a printer.

Richard and Amo began working together at Minnesota Center for Book Arts after being introduced by Amo’s aunt Melanie. Richard was looking for some help in putting together his annual calendar, and Amo was interested in learning about letterpress. They discussed a collaborative project, a collecTION OF TWO lETtER WORds, broadening their skill sets from initial design to marketing. What started as a three-month internship turned into a year-long collaboration, with Amo and Richard influencing one another’s art both in and out of the studio. RelationSlips is both a documentation of their process and a celebration of their time working together.